At a recent Agile meetup, while discussing how human resources could best serve the needs of their Agile teams, I offered some people the opinion that HR should seek to hire people who lived by the values and principles of an Agile organization. I went so far as to offer Toyota as an example of a company who has been hiring people that fit their culture for over one hundred years (even when they still made looms and spelled their name as Toyoda). The almost immediate and unanimous response provided the title for this article: “That’s not Agile, that’s Lean…”

As an advanced student and teacher of Toyota principles and as a relative newcomer to the Scrum framework, I was struggling with how Lean and Scrum fit together in an Agile organization. At that moment, the need to fully define the relationship between these two became a critical imperative to my career as an Agilist.

I first went looking for the commonalities that are shared by both Lean and most Agile methodologies and frameworks from the software development world. The key elements that they all contain provide what I call “Value Exponential”.  This concept is best visualized as follows: 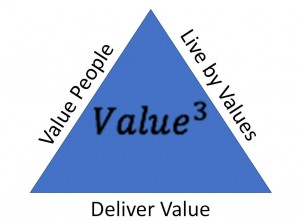 All of the Agile organizations that I admire share three common uses of Value: they deliver value; they value people and they live by values. Whether they are producing cars or software for profit, or are charitable or non-profit in their approach to their work, all Agile organizations thrive because:

Through my journey, I have discovered three critical learnings that provided the much needed link with what I now see as allowing me to fully answer the people who believe that there is no room for Lean thinking in an Agile world:

When I first started working with Pyxis, one of my colleagues shared the Agile Wheel to help me place my “Continuous Improvement tools” in relations to my learnings about the Scrum Framework. 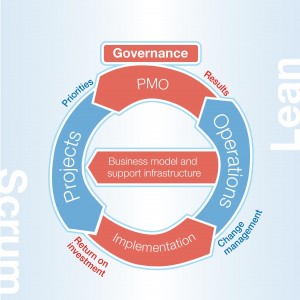 He explained that most organizations follow a similar high level workflow:

I cannot think of any organization that does not follow this pattern. What makes an organization truly Agile is how fast they can make the wheel spin. Agile companies like Google can reach almost continuous delivery while other organizations take one or two years from the time KPIs are reported from operations, project funding is approved, projects completed and change management performed so that the operations can be improved.

So, what makes Google so fast in relation? Yes, they use Scrum teams for software development, but they also use tools from all around the wheel including Lean, TPS, Kanban, XP, Continuous Integrations, SAFe and many other so-called Agile techniques. When organizations open to the broader world of the wheel, the Agile toolkit is expanded and so is the ability to make it work faster.

I have witnessed many organizations for which Agility equals Scrum. In my mind, if you only put air in one part of your bicycle’s tire, you will experience a very bumpy ride. It is therefore key to develop an Agile culture and associated tools in order to make the wheel spin faster and hence become more able to adapt to the changing world around us.

The Roots of the Agile Paradigm

Another exercise I undertook was a historical review of Agility. I discovered that Scrum and the Agile Manifesto are relative latecomers to the game, starting with the Takeuchi and Nonaka article in 1986, the introduction of the Scrum Framework in 1993 and the development of the Agile Manifesto in 2001.

By comparison, Shigeo Shingo penned “The Toyota Production System” in 1981 in response to the need to explain techniques and philosophies that Toyota had been using for decades to the North American culture. The roots, however, are to be found much earlier in the writings and practices of the early industrial age with leaders such as:

Indeed, many of these key figures were influential on one another in the burgeoning the “Quality” movement. While such disciplines as Six Sigma continued to focus on Quality, others moved beyond mere quality into the realm of Value and Values. I visualize this Value movement like the growth of a tree from humble roots into the Value movements of today, with the common elements of empiricism and a defined set of principles and values providing the framework to build upon.

The third element to complete my study came from conversations I had very recently when another colleague introduced me to the Spine Model. 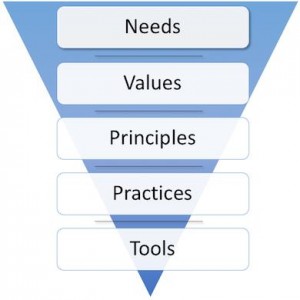 Basically, the Spine Model explains that most organizations begin their Agile journey at the bottom of the spine, but as delivery becomes more complex, there is a need to ascend the ladder first to practices, then to principles and finally to values and needs. Each step up the spine has a corresponding element both in Lean and Agile as outlined in the following chart: 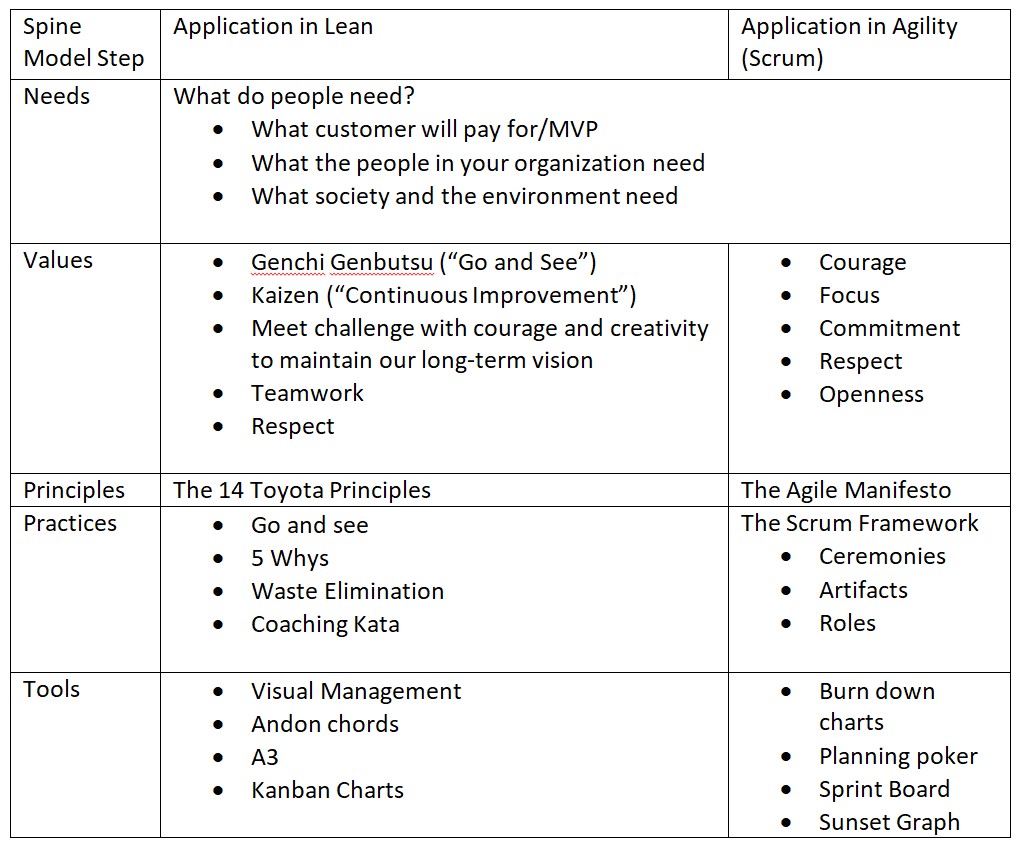 Essentially, the Spine Model tells us that to drive a successful culture in our organization, we must move beyond simply using tools and best practices and go towards Principles and Values, and addressing human and environmental needs. When the entire organization focuses upwards on the spine, amazing things can happen… and is it not what Agility is all about?

[i] The Spine model: https://spinemodel.info/explanation/introduction

I believe that in order to be successful in the 21st century, one must not just manage and cope with change, one must aspire to be transformational. But how does one learn to “think outside of the box”? As a lifelong learner, I want to be a part of your transformation journey. My experience as a corporate change management and process specialist has allowed me to develop my Lean, Agile and Six Sigma skills into a varied toolbox to simplify change management and development. My training as a life coach and mental health facilitator provides a collaborative human touch to add heart and happiness to the experience. After all, Lean is really about finding the shortest distance between two points by leveraging the power of your people. I look forward to providing your team with the training and consulting services that will simplify and demystify your transformation journey.

Agile leadership is the key to self-organization