Nowadays, Agility is most of the time still generally connected to the work of development teams. We sometimes notice a lack of alignment between the work of the teams and the objectives of the business. Also, upper management can take for granted that its will is clear, known and shared; it’s not always the case. Despite themselves, businesses are sometimes stuck in their routine and the urgencies of the day-to-day and end up loosing sight of their fundamental objectives.

Throughout the years, several methods have been suggested to increase the alignment of efforts : defining yearly objectives, SMART, dashboards, etc. Even though these tools bring more visibility, their use is often very isolated and confidential.

A method that attracts more and more attention is the Objectives and Key Results (OKRs). In my eyes, they are a mixture and an interesting evolution of the tools mentioned previously.

Put forward by Andy Groves, ex-CEO of Intel, OKRs have initially been used within that organization. John Doerr, who also participated to the implementation of OKRs at Intel, has subsequently presented them to Google’s upper management who saw a lot of potential there. OKRs have since then been used by Google to define and monitor quarterly and yearly objectives. OKRs are also used by many other businesses working in different fields (for example : Slack, Eventbrite, Netflix, etc).

In a few words, OKRs are ambitious objectives defined quarterly for all levels of the business. They are measurable, aligned and visible to the entire organization.

This method asks us to define ambitious objectives. Of course, some will fear harming the troops’ morale or putting the teams at risk of failure. Even if these high objectives can make some people uncomfortable, it has been shown that employees will have a tendency to get out of their comfort zone and thus reach superior levels of performance.

OKRs go much beyond a simple list of tasks to perform that is shared with the entire organization. It’s rather about establishing objectives that speak to the whole organization. All the employees need to feel challenged. 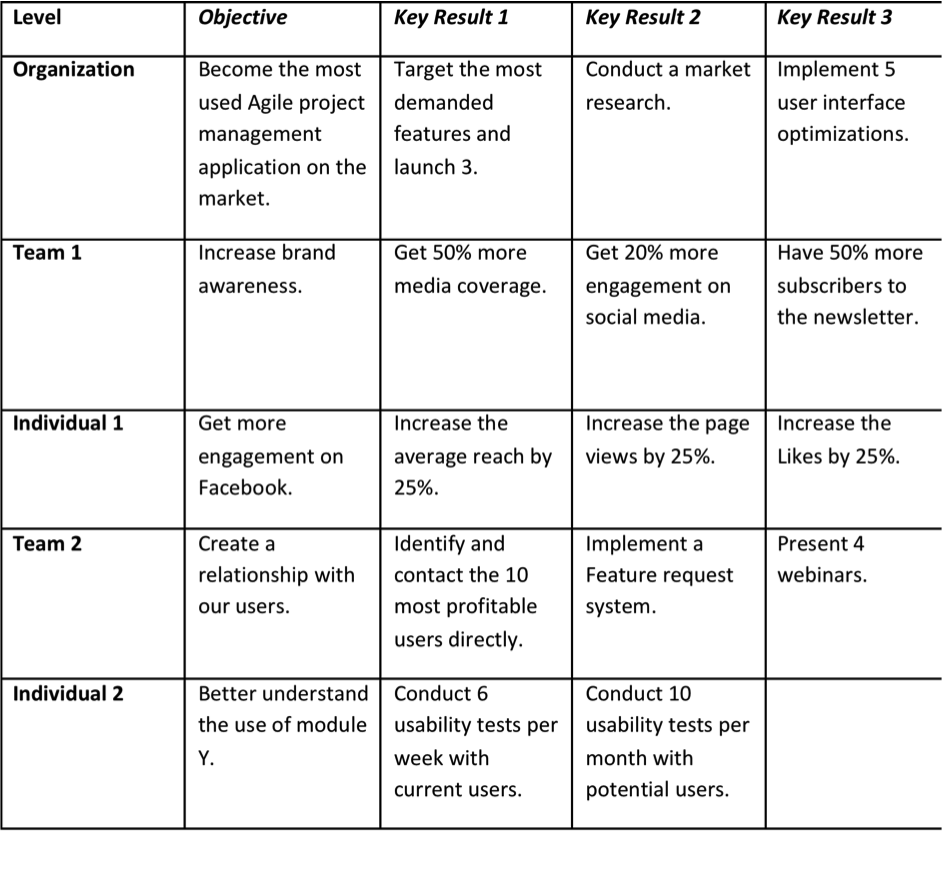 Individual OKRs help define what a person will work on during a quarter. Team OKRs define a goal for the team, they’re not a list of individual objectives. Finally, organization OKRs give the global orientation and promote aligning the efforts of the whole business.

The process starts with a reflection, a definition as well as sharing the organization’s objectives. After that, individual and team OKRs are created. It has to be a work of cocreation, not be imposed by the managers. A possible guideline is to say that more than half the OKRs are defined by the individuals toward their managers. When defined, the fact that the progress is visible and that achieving them is linked to reaching other people’s objectives incites people to be more invested and to keep the progress up to date. This visibility is essential.

On an individual level, OKRs offer a refreshing and motivating alternative to traditional objectives established during the annual evaluations and too often neglected throughout the year.

In my mind, the ambitious aspect of OKRs is the major difference when compared with SMART objectives. By focusing on the Ambitious aspect rather than the Achievable (the A of SMART), OKRs incites people to surpass themselves and thus create a motivating and secure environment in which accountability and achievements of individuals are put forward. In fact, all the OKR mechanisms are in place to foster this type of environment, would that be the visibility aspect, the short time intervals or the ways to evaluate the progress that are kept simple. For me, implementing OKRs is an excellent occasion to initiate a reflection that aims at cocreating an action plan that is measurable and aligned toward the achievement of a common mission.

Overall, it’s not a particularly demanding exercise and it can prove to be very fruitful. Therefore, I invite everyone to try the experiment. What do you think?

Hugo has been working in project management for over 15 years. As head of the development department, he has been actively involved in every development phases of a start-up reaching up to 200 employees.

As early as 2007, he initiated an Agile transition within the company. He had the software development processes and teams evolved to support this growth.

At Pyxis, he now has the desire to share his experience and skills by taking part in various mandates.

Why leaders need to get more co-creative